The term "Macanese" or "Macaenses" commonly refer to the people of or from Macau, the former Portuguese colony 40 miles southwest of Hong Kong in Southeast Asia. It is here that many of us have our roots.

The history behind the Portuguese colonization in Macau is long and varied. The Links provided in this website will provide a far better overview of events and milestones than we can on this page. The historic Handover of Macau back to China on December 20th, 1999 is chronicled in a separate section in this website.

Over the years, many of our people left Macau for other places such as Shanghai, Hong Kong, Australia, United States, Canada, the United Kingdom, Brazil etc. Those of us here in Vancouver, Canada, with roots/ties to Macau, decided to form a social "non-profit" club in order to carry on our traditions, culture, customs and heritage for the betterment and benefit of our younger generation. There is another club here in Vancouver, and to which most of us had belonged to as members, however they focused their attention, then and now, on the older generation and we respect them for that. However, we felt strongly that the future of our people, our customs, culture, heritage and traditions lay with our youth! We wanted a club that would cater to "ALL" generations: our seniors - out of respect and acknowledgment for their wisdom and guidance, and to our youth - for they are our future and our hope.

Casa de Macau in Vancouver was officially registered under the Societies Act of British Columbia, Canada on April 3rd, 1995 and now boasts a membership of over 200 Filho-Macau's (Sons of Macau). The Fundação Oriente (a heritage foundation created to sustain the Macanese heritage worldwide), has generously agreed to partially assist with the funding of certain of our cultural programs and activities (including our website and newsletter) - we are grateful for their generosity and we thank them.

On December 20th, 1999, Macau was handed back to China in accordance with the agreement between the Governments of Portugal and China. Following is a special pictorial section of that historic event.

The Handover of Macau from Portugal to China at midnight on the evening of December 19 & 20th, 1999, remains the most significant historical episode in the 442 years of Macau's existence. This collection of first hand photographs chronicles that historic night and serves as a permanent archive and collection for our members and friends. It further serves as a constant reminder of who we are, where we came from and why we must preserve our heritage and culture for future generations. 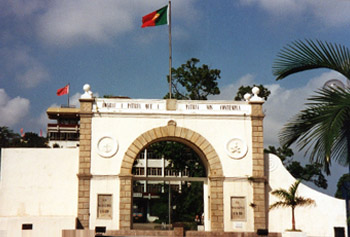 Upon arrival in Macau, visitors and guests were greeted by dull stormy skies along with telephone poles adorned with both the Portuguese and Chinese flags. A scattering of Chinese gunboats can be faintly seen in the outer harbor in the background.

Throughout the Handover Venue, guests were ushered along wide expanses of red carpeting. Here the carpeting is plainly evident as accredited guests in the background are screened through metal detectors before being allowed into the Main Venue. Once in, burgundy clad hostesses ensured everyone was treated royally.

Artists and youth from Macau staged a 'musical-historical' cultural performance of Macau's history from 1557 to 1999. Approximately 2,000 guests were taken along a musical ride through the ages culminating in a Grande Finale which touched upon every heart in attendance.

After the show, guests were escorted outdoors for open-air cocktails and entertainment. Dinner followed in a giant "tent" especially designed and constructed for the Handover. This picture provides a glimpse of the over 2,000 guests being seated by hundreds of waiters and waitresses.

Just prior to the banquet, all the Presidents of the Casa's gathered for a photograph along with Dr. Monjardino from the Fundação Oriente. This gathering might be the last of it's kind unless or until a 4th Encontro materializes.

Pictured at right is the writer, Mike Guterres, along with Col. Tiago Vasconsuelhos, the Governor's Aide -de-Camp who was seated at our table. Tiago also accompanied the Governor to Vancouver in November 1999. Col. Vasconselhos is returning to a regular Portuguese army unit upon his return to Portugal. We wish Tiago our very best and hope we shall run into him again sometime in the future. He has been a good friend to our Casa and we are thankful for all the help he has given us.

Following dinner, guests were escorted along more red carpeting to the actual hall where the Handover was to take place. This picture shows the Portuguese podium used by the President of Portugal, Sr. Dr. Jorge Sampaio, in his final address as the Head of State of Macau.

As the clock ticked down the minutes, guests and media from around the world awaited the arrival of the official delegations while the Portuguese and Chinese military bands alternated in 'entertaining' a somber crowd. Pictured to the right is the Portuguese military band. The podium and seating for the official delegations is located to the left of this picture - out of view.

Upon arrival of the official delegations, the President of Portugal, Sr. Dr. Jorge Sampaio addresses Macau, and the world, in his last speech as the Head of State of Macau. In his speech he urged the Government of China to honor the agreement made with respect to the personal and religious rights and freedoms of all Macau residents. He spoke proudly about all Macau had achieved throughout it's history and assured Macau, and the world, that Portugal will be watchful to ensure that all of the terms of the Handover are put into place, and will continue under the new administration. The Portuguese National Anthem was played immediately following Sr. Dr. Sampaio's speech as the picture to the right illustrates.

During the National Anthem, the flags of Portugal and the Leal Senado (Loyal Senate) are lowered in unison for the last time.

The day following the Handover, December 20th, 1999, scores of Chinese gunboats can be seen in the inner harbour signifying perhaps an unwritten statement from the new regime.

The pictures in this collection are not meant to duplicate the scores of photographs already seen in many of the major newspapers and magazines published throughout the world. Photographs of the lowering of the Portuguese Flag at Government House are examples of what we have avoided trying to duplicate. These pictures are intended as a personal recount of a very significant event for the Macanese Diaspora.

This pictorial was assembled from photographs taken by our sitting President, Mike Guterres, while he was at the Handover ceremony as a guest of the Government of Macau. All pictures remain the property of Casa de Macau Vancouver and may not be copied, reproduced or otherwise disassembled without permission.